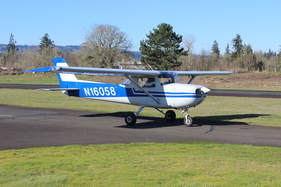 When you hear someone talk about having a "pilot's license," they are usually referring to a Private Pilot's License. A Private Pilot License (technically a "certificate" - this is what the FAA calls it) allows the pilot to fly airplanes within the United States' National Airspace System. Private Pilots most frequently fly small airplanes with 2-8 seats, though if one has the resources, they are able to acquire training and certification to fly larger airplanes like turboprops and jets for their own purposes. Sometimes the term "private pilot" is confused with someone whose job it is to fly someone's private jet around, but legally speaking, this is inaccurate. A Commercial Pilot's License is required anytime a pilot is to be paid or compensated to fly. Someone who holds only a Private Pilot's License cannot charge passengers or other parties money in exchange for transportation or airplane rides, unless the pilots themselves are paying at least an equal share of the expense.

Private Pilots are not limited to how far they may fly an airplane from their point of origin. They may carry passengers as well (though not for hire). Private Pilots are allowed to fly during the day and night, over water, and into and out of large airports (though many large airports such as PDX, SEA, etc. will deny the request if the airplane is too slow during busy hours). Private Pilots cannot fly in clouds or in low visibility conditions unless they have received additional training and certification called an Instrument Rating - which is HIGHLY recommended for all pilots, even if they don't plan to fly in inclement weather.

A Private Pilot's License never expires, but all Private Pilots must have completed a Flight Review within the last 24 months in order to keep their license "current" so that they may fly an airplane. This training consists of ground and flight training with a flight instructor. A Private Pilot must also hold any class of current FAA Medical certificate or meet what are known as BasicMed requirements. 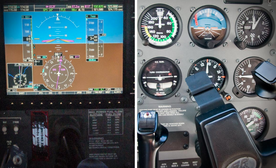 So how much does it cost? This varies greatly depending on the type of airplane one uses for training, the location of the training, how prepared the student is at each training session, and how quickly they can become proficient flying the airplane, but budget anywhere from $7,000 to $11,000 from start to finish, including the purchase of headset, the examiner fee, and even aircraft rental insurance. Some ways to keep this cost minimized include studying up on each maneuver to be performed during the next flight, renting an older airplane with minimal "glass" instrumentation (refer to the photo to the right: the flight deck on the left consists of "glass," while the cockpit on the right uses standard analog gages), renting small, old, and fuel-efficient aircraft such as a Cessna 150, and enrolling in a "mom and pop" flight school in a rural area. Large flight schools and aircraft rental in large cities tend to be much more expensive. Fortunately, most Portland, Oregon flight schools are actually fairly reasonable with their aircraft rental rates. The use of FAA-approved flight simulators may also help reduce Private Pilot flight training costs. This article explains how to maximize savings during flight training.

Want to become a professional or airline pilot? Typical progression looks like this: First you must obtain your Private Pilot license, typically in single-engine airplane. Next, you will obtain your instrument rating so that you can fly in inclement weather. After that, you will need to obtain a Commercial Pilots license. With this license, you will be able to be paid or compensated to fly. Common low-time commercial pilot jobs include aerial tours, skydiver dropping, pipeline patrol, aerial survey, and banner towing. There are even some small "airline" copilot jobs through the US, Alaska, and Hawaii that may hire a low time Commercial pilot. However, these jobs can still be hard to come by due to limited openings, and some may require 500+ hours of flight experience.

Continuing on towards a career in aviation, you will need a Multi-Engine rating, which will allow you to fly an airplane with more than one engine. Some professional pilots will begin their career as a copilot of a small "private" or "corporate" jet or turboprop, and once you have a Commercial Pilots license with a multi-engine rating and an instrument rating, you will be eligible to be hired for such a job. However, many positions like this require at least 500-1000+ hours of flying experience. To bridge this gap, many pilots will obtain their Flight Instructor Certificate (CFI), which allows them to log all flight time that is accumulated while providing flight instruction to students.

There are many professional pilots who have gone on to have full, successful careers with only a Commercial Pilot certificate, flying all kinds of private and corporate jets all over the world. However, in order to fly for an airline or to be a captain for a charter company in the United States, an Airline Transport Pilot (ATP) certificate is required. This is the highest level of airmen certification in the United States. Depending on the type of flight training you receive, this certificate can be obtained with 750 hours (through the military), 1,000 hours (through a 4-year collegiate aviation program), 1,250 hours (through a 2-year aviation program), or 1,500 hours (all other situations) of flight experience logged. There are pros and cons to all types of training, but if cost is of concern to you, make sure to check out this article on how to save money during flight training.

So how does one get started? If you are ready to begin your journey to become a pilot - as a hobby or as a career - here is the good news: you can get started right now and knock out a significant portion of the requirements before ever stepping foot inside an airplane. As previously mentioned, you will need to pass a 60-question written test. One of the most recommended and widely used paths towards certification is to study for and take this test BEFORE you begin the flying portion of your training. To sum it up, learning the material before flying will familiarize your brain with concepts and topics so that when you get into the airplane, your brain will make stronger connections much faster and you will learn more efficiently. This can save you a TON of money and frustration, and can significantly reduce the amount of time required before you take your test.

Our suggestion? Enroll in our online ground school which will prepare you for AND provide the required endorsement to take the written test. This ground school Is particularly valuable because you have lifetime access to the program, which will receive lifetime updates as well. You will be able to use the program to review and study for your flight reviews every 24 months.
Below is a more detailed list of everything that is required in order to acquire a Private Pilot's License. This is taken from the FAA "rulebook" called the Federal Aviation Regulations Chapter 61, which discusses pilot certification and training:
The Private Pilots License is what you will want if you have aspirations for a career in aviation, or if you want fairly unrestricted flight privileges. However, the Sport Pilots License, which carries additional restrictions and limitations but requires less training, may be a good option if your long-term aviation goals are nothing more than to "fly an airplane" and wish to minimize training costs. Certain medical conditions may also make the Sport Pilot License a better option. If medical conditions are not an issue, our personal recommendation is that every aspiring pilot acquire their Private Pilots License no matter their goals in aviation because the additional training will make a safer pilot and will allow easier access to additional growth opportunities as an aviator. The limitations imposed on Sport Pilots make it such that, in most cases, newer and often more expensive aircraft - which are also more difficult to find - are the pilots only option. This negates the idea that Sport Pilot training and certification is any less expensive than Private Pilot certification.
Are you serious about learning to fly? You can get a head-start now. We've compiled the 3 most essential books that you will need to begin, no matter what flight school you choose.
These additional books and tools are highly, HIGHLY recommended. Some of them are actually required for your exams, and others will make your training process much more efficient, both time and money-wise.
​Learn how to use these Guide/Test Prep books to pass your tests on the first try!
Rod Machado's Private Pilot Ground School eLearning Course 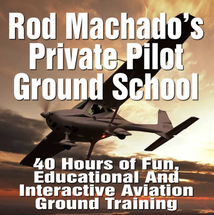